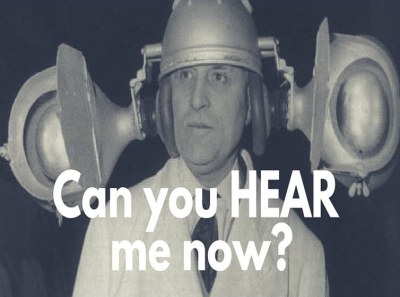 “Bob is garbled.” I cannot understand what he is saying.” Bob was Robert Hooke, an Englishman, who is credited with the first wired form of communication which occurred in 1667. Bob’s historic achievement ultimately replaced drums, smoke, courier pigeons and signal flags. His transmission of vibrations over a wire created the foundation for the telegraph and the telephone. Bob kept asking his assistant “can you hear me now?”

180 years later, Marconi demonstrated his Telegraph by using Morse Code to communicate between two points over a wired system. Thirty years later, Alexander Bell patented the telephone and in 1915, the first wired long distance telephone system between New York and San Francisco started operation. Cable was laid across oceans creating the international communications system with the phrase ‘can you hear me now’ being heard in a host of languages.

With wired communications came the need for communication traffic cops. Called operators and working in large and small groups around a switch board, operators literally plugged people together by inserting wired cords into the switch board’s receptors creating a wired connection. Since the operators needed both hands to perform their switch board functions, Ezra Guilliland invented the headset which weighed more than 10 pounds and featured one earpiece attached to a phone with a large microphone resting on the operator’s shoulder.

Heavy and bulky worked okay in the first call centers, but were not convenient for pilots needing air to ground communications. Microphones and headsets were separate until the 1960’s when headsets and microphones were integrated.

In 1961, two commercial pilots, Courtney Graham and Keith Larkin responded to a United Airlines solicitation for the design of a new lightweight headset which integrated the microphone and headset into a single unit. Following United’s acceptance and an order for the proposed product, Graham and Larkin incorporated Pacific Plantronics in May of 1961. Several years later, the Federal Aviation Administration selected Plantronics as the sole supplier for the FAA’s Air Traffic Controllers; shortly thereafter, Bell Telephone Company selected Plantronics for the supply of headsets in the company’s call centers.

Over the following 50 years, Plantronics (now Poly) continues to be the industry standard for headsets. The company has grown in size and scope of products as it continues its effort to eliminate the phrase ‘can you hear me now?’